By Jonathan F. Zaff, Founding Director of the CERES Institute for Children & Youth

This blog post was originally posted in Psychology Today.

Amanda knows a lot about adversity. Her parents were on drugs, and as a result, she suffered from trauma and neglect at a young age. She was bullied at school and eventually left.

Life soon became more severe. Amanda (we’ve changed her name to protect her identity) became a prostitute and needed help from the police to escape an abusive pimp. Eventually, she found a local program that made all the difference, connecting her with supportive adults who provided social and educational services. Today, Amanda has attained her high school degree and is on a road to a better future.

We met Amanda and lots of young people like her in our research for Don’t Quit on Me: What Young People Who Left School Say About the Power of Relationships. Amanda was one of the many young people we surveyed who experienced a level of adversity that ignites an almost daily fight-or-flight response. 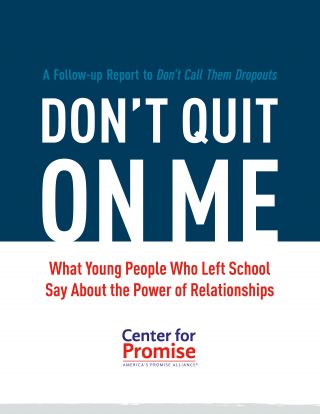 This toxic stress taxes their mental and physical health and soon school becomes irrelevant in their lives. The confluence of homelessness, a catastrophic family health event, physical abuse, or neglect leads nearly 500,000 young people to leave school each year without graduating.

Based on this understanding, my colleagues and I at the Center for Promise at Boston University set out to learn if and how supportive relationships can help young people stay in or re-engage with school. We surveyed nearly 3,000 young people and had in-depth conversations with 120 more.

Young people told us that relationships buffer adversity and boost their chances of graduating on time — to a point. We found that: 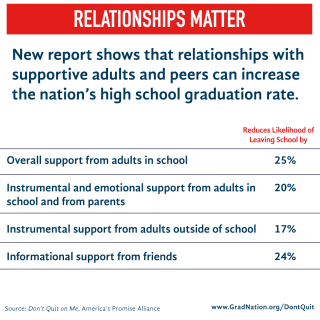 The trauma these young people experience each day inches them closer and closer to an adversity cliff, which many researchers have related to heightened levels of acute and chronic health conditions, drug use, risky sexual behaviors, and leaving school without graduating.

When considering the level of adversity these young people face, the inclination of practitioners and policymakers is to go myopic (No-excuse schools!), go too broad (Eradicate poverty!), or just throw up their hands in defeat (It’s too much!)

I understand. This level of adversity is too much for a parent, teacher, coach or mentor to resolve alone. But that’s no reason for us to quit. The young people facing the most adversity should get the most help. They need intentional, professionalized efforts to resolve trauma, health problems, and social and economic barriers.

Programs such as Communities in Schools, Turnaround for Children, and LIFT help young people strip away the barriers that derail adolescents. They provide mental health services for trauma, housing vouchers for the homeless, and access to other much needed social services. With barriers resolved, young people have the bandwidth to focus on longer-term goals, including school.

Amanda stepped off the cliff, but there were people — teachers, mentors, friends — who grabbed her in time. With lots of the right kind of help, she survived.

With help, Amanda was able to direct her strengths toward the educational goals that can propel her toward her dreams. If that’s what we want for all young people, we can’t quit on those walking precariously close to the edge.

Jonathan F. Zaff is Research Professor, Applied Human Development and the Founding Director of the CERES Institute for Children & Youth at the Boston University Wheelock College of Education & Human Development.

← When the Deck Seems Stacked, Helping Kids Beat the Odds It Takes More than a Superhero: Promoting Youth Thriving through Webs of Support →

“I Miss the Sound of Our Bells:” Massachusetts High School Students Reflect on Life During COVID-19

The latest research from CERES Institute, released in February 2022, shares the lived experiences of high school students as they navigated a drastically altered world during the 2020–2021 school year.

END_OF_DOCUMENT_TOKEN_TO_BE_REPLACED

In partnership with MENTOR (the National Mentoring Partnership), CERES Institute is working with a set of school districts on how they can develop a “relationships strategy” for their schools. CERES Institute will serve as a research and evaluation partner for MENTOR during this three-year initiative.

END_OF_DOCUMENT_TOKEN_TO_BE_REPLACED

In Florida, thanks to a robust school choice environment, parents of students with disabilities have access to several educational options through two specific statewide scholarship programs. To shed light on how parents utilize these scholarships, a team of researchers from CERES Institute for Children and Youth, in partnership with the Department of Education Reform at the University of Arkansas, share findings from a mixed-methods study, conducted between fall 2020 to spring 2021, as well as implications for policy and practice.

END_OF_DOCUMENT_TOKEN_TO_BE_REPLACED

CERES Institute and the National Center for Learning Disabilities (NCLD) are partnering on a mixed methods research study to develop a deeper understanding of general educators’ experiences teaching students with learning and attention issues during the COVID-19 pandemic.

END_OF_DOCUMENT_TOKEN_TO_BE_REPLACED

How can Debate-Inspired Classrooms better engage students as leaders in their own learning? The CERES Institute for Children & Youth is partnering with the Boston Debate League and Boston Public Schools’ Dr. William W. Henderson Inclusion School to answer this question and more.

END_OF_DOCUMENT_TOKEN_TO_BE_REPLACED

Evaluation of the Department of Youth Services’ YES Initiative

The CERES Institute for Children & Youth is examining how the Commonwealth of Massachusetts Department of Youth Services’ Youth Engaged in Services Initiative – the YES Initiative – provides voluntary individualized supports to youth involved with the juvenile justice system and the impact of the YES Initiative on youth recidivism rates.

END_OF_DOCUMENT_TOKEN_TO_BE_REPLACED

The Center for Promise

The Center for Promise is the applied research institute of America’s Promise Alliance, housed at Boston University Wheelock College of Education & Human Development. Its mission is to develop a deep understanding of the conditions necessary for young people in the United States to succeed in school and life.